Success with organic farming in Kula and growing award-winning coffee have gained them notability, and as their fellow members at Maui Country Club you can tap into their expertise. Here’s an introduction to Kupa‘a Farms’ owners Janet Simpson and Gerry Ross.

Canadian born with coffee in her blood, Janet’s story began in Calgary, Alberta in 1990. Together with her twin sister Judy, they opened Cochrane Coffee Traders – a coffee roasting company 15 miles outside Calgary in the town of Cochrane. Within a year, the thriving coffee company transformed into a bustling cafe for locals and cowboys looking for lattes and espresso.

While Janet was busy with the cafe, Gerry, an American-born geologist living in Cochrane, was hard at work with the Geological Survey of Canada. On weekends, he would cycle regularly and finish his rides with a “Banana Buzz” (banana, frozen yogurt, and double shot of espresso) from Janet’s cafe.  It wasn’t long before the two fell in love.

In the summer of 1997, Janet’s parents, who already lived and owned the asparagus and corn farm on Maui, came to visit Gerry and Janet in Cochrane.  During this visit they noticed a ‘for sale’ ad for a coffee farm in Kona on Janet and Gerry’s fridge. After further inquiry, they learned it was a dream of theirs to escape the -40 degree winters and start a coffee farm. Later that evening, their dream was born when Janet’s parents offered the venturesome couple to move to Maui and make Kupa‘a Farms their own.

“Marilyn and Jerry Simpson introduced me to Maui Country Club back in 1992 when Janet and I first met. When we chose to move here to farm and help take care of Jerry and Marilyn in their golden years, Jerry suggested a membership at the Club because ‘you can’t farm all the time.’ Sage advice for sure!” 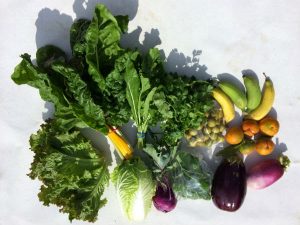 Members since 2003, Janet and Gerry are avid golfers, and in recent years have developed a growing relationship with the Club’s Executive Chef Sean Christensen. Chef Sean’s “Fresh Local Sustainable” cuisine aligns with Kupa‘a Farms’ philosophy of “Commitment and passion for growing, providing and enjoying delicious organic produce that’s abundant in nutrition and flavor.” Kupa‘a Farms beautiful produce is now an established part of the Club’s menus – lucky us!

The partnership with Maui Country Club is a win-win exchange. A delivery stop in the kitchen is followed by picking up recyclables that enrich the soil at Kupa‘a. The Club’s shredded paper is used for mulch, and kitchen food scraps are turned into compost which keeps fertilizer bills down and boosts vegetable quality; diverting an average 200 pounds a week from the landfill.

In Hawaiian, Kupa‘a means “to make firm, or solid”. The name was chosen to reflect the solid, life-giving practices that are used to grow our food. 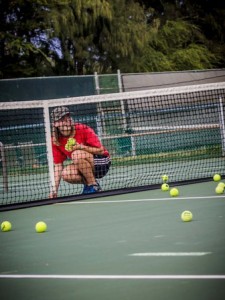